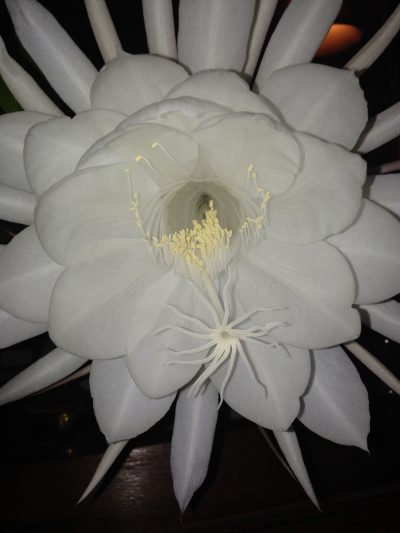 Bring home Epiphyllum oxypetalum, the magnificent night-blooming cereus, but expect no one to say nice things about your new plant . . . because they won’t.

Then be patient. Be very patient. Two to three to five years patient.

The night-blooming cereus is a climbing, thornless cactus with long and unadorned lanceolate green turned brown stems when mature, from which grows, at random angles, nine inch long, moderately serrated and pendulous leaves with the thick feel of a succulent. An inordinately thick leaf midrib reveals alternating lateral veins. Architecturally, the plant gets a ‘C’ at best. When the plant gets too dry the leaves take on a resemblance to crinkly green leather.

But better dry than too wet, because an overwatered, or worse, overwatered and overfertilized plant declines quickly. If you see red dots on a leaf be ready for them to multiply rapidly, followed by leaf yellowing, splotchiness, and huge areas of the leaf dying. The dead area gets thin, brown, and lacy, and might affect the entire leaf.

But under no circumstances give up on this plant, no matter how sick it appears. I speak from experience. In late summer 2016, after six years of proper E. oxypetalum plant nurture, I committed the unpardonable plant sin of too much water and fertilizer. I knew better, but did it anyway. Almost overnight the plant’s decline began and was rampant, to the extent I whittled off over half the foliage on four plants within a six week period. They looked miserably poxed. At this point the growing season was closing so I put the plants in my basement and began winter maintenance, expecting the worst.

But they forgave my loving them too much, then surprised me in summer 2017 by showing off what they do best. They bloomed, and the dimension, beauty, and olfactory pleasure of these blooms is best described as GRAND. The bloom’s petals are a dinner plate wide, and its depth from stigma to receptacle is 4-6 inches. A divine fragrance captures you twenty feet away, and you find yourself drawn into the inviting, cavernous depth of near-translucent long white petals and delicately curved filaments supporting gold-dusted anthers. The long style displays a cupped stigma with 14-18 elegant hydra-like tentacles which upon close examination appear to be delicately sprayed with white diamond dust.

But an ephemeral enjoyment it is, because the bloom you watched develop over a period of three to four weeks opened some time after 2100 hours last night and will be forever closed by dawn.

The wait was more than worthwhile.

This entry was posted in WFW. Bookmark the permalink.